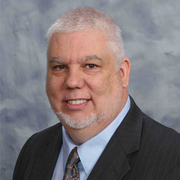 Ted Toth is a Senior Technical Advisor at Rosenberger North America Pennsauken, NJ. He entered the family business in 1975 while still in high school. He attended the university of DAD. Ted was formally President of Toth Technologies, a third-generation shop started by his grandfather in 1948. He joined the NTMA in 1993 after purchasing the company from his father with his two brothers Tim & Tom.  At that time, they had 12 employees, in a 5,000 sq foot garage.

In April of 2012, not having a fourth generation to lead and having grown their business to 30 employees and 30,000 sq foot 6S facility, they decided to sell Toth Technologies to one of their customers, Rosenberger of North America. Rosenberger is a niche manufacturer in the space, defense and commercial communication industries, which manufactures parts for satellites, radar systems, and microwave connectors. RNA is one of 27 privately held companies of the German Rosenberger family, which also includes 3 brothers, and over 11,000 employees.

Today, Ted’s job at Rosenberger includes leading new process/business development, six sigma, and lean initiatives. Since 2012, the company has more than doubled in size and capabilities through the investment of their parent company. Ted served as the president of Philadelphia Delaware Valley NTMA Chapter from 2003-2007. Before his role on the Executive committee in 2010 and as the 2014 NTMA Chairman, Ted participated in many NTMA teams.

Toth Technologies/Rosenberger North America was an American Machinist Top 10 shop in 2007 and a Modern Machine Shop Top Shop in 2012. Their moto is “Pride in Precision”.